The Duchess, Kate Middleton has taken on assisting with children’s mental health. Kate has made a video in which she is supporting the children’s charity Place2Be in stating “every child deserves to be supported through difficult times in their lives”. She goes on to speak about how she understands the importance of providing kids with the mental and physical support they need “to cope and to thrive”. 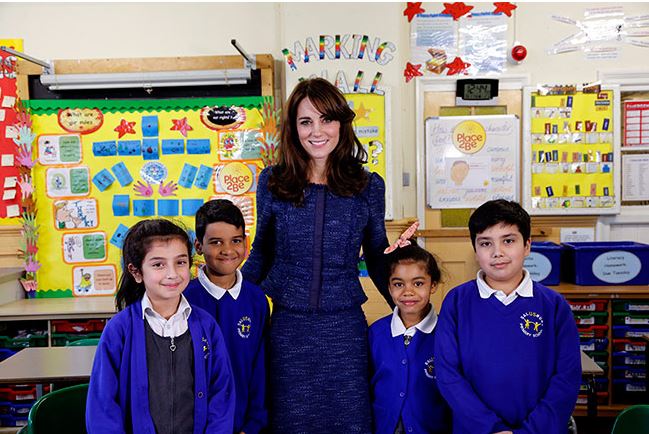 In the video (seen below) she speaks with 4 children who have seen tremendous benefits from the Place2Be charitable organization. In the video she says:

“Every child deserves to grow up knowing their potential and feeling confident that they won’t fall at the first hurdle – that they cope with life’s setbacks,”

In the video the Duchess speaks with the kids about how Place2Be has assisted them in speaking about their feelings. You will see, in the video, that one child responds:

“Place2Be has helped me a lot. If it wasn’t in the school I don’t think I’d be able to cope as much.”

She goes on to say:

“With early support they can learn to manage their emotions and feelings and know when to seek help,”. “A child who has overcome challenges with proper emotional support will emerge stronger.”

The mother of two and member of the royal family stated that her work with other charitable organizations, such as Action on Addiction, has assisted her in seeing how issues children face prior to adulthood may. She went on to say:
“William and I feel that every child deserves to be supported through difficult times in their lives,”
This makes the second year that Kate Middleton has produced a video in support of Children’s mental health. Last year Kate worked with other parents and celebrities by publicly speaking with their children; many of which suffered from some type of mental health disorder.

The princess says she will forge on bringing prominence to the importance of children’s mental health and depression when she acts as an editor for the Huffington Post in the UK in February. Kate has joined the news website in an effort to assist in launching Young Lives Matter, in which she will discuss the stigma around children’s metal health issues and drug addition counseling in the UK.

The Video of The Duchess on Children’s Mental Health